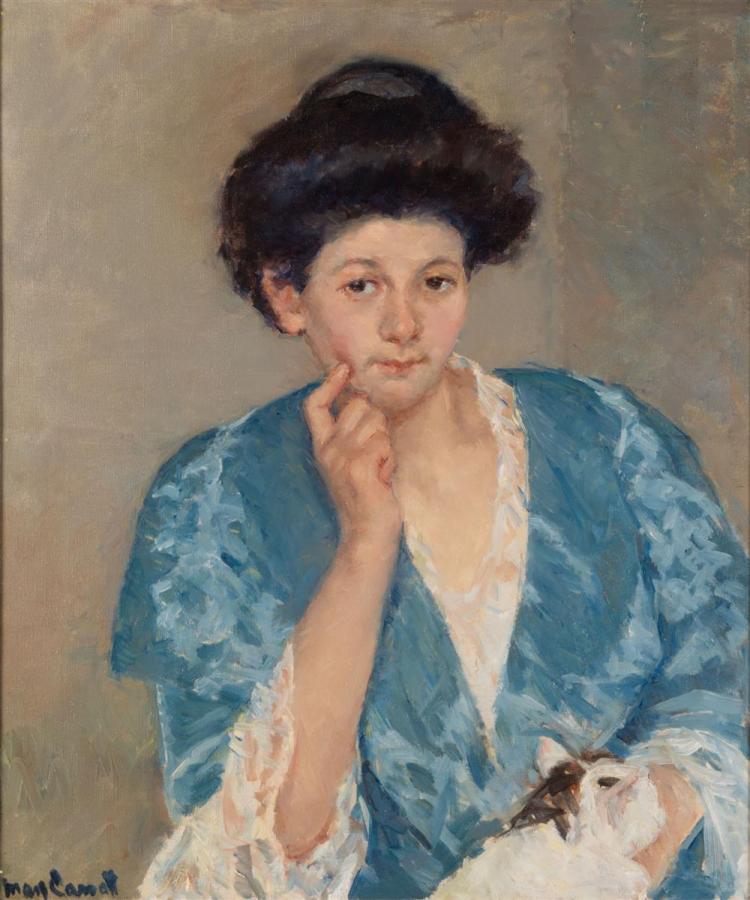 
Other Notes: In this striking oil portrait, Augusta, who was the subject of several of Cassatt's oils, stares out at the viewer with deep, doe-like brown eyes, a coy expression on her face, with her mouth closed and the hint of a smile in the dimples at each edge of her lips. She seems relaxed, leaning on her right arm, with her right forefinger resting on her cheek as she sits in quiet repose. The creamy skin of her décolletage is enveloped by the bright blue textured silk and masterfully rendered white lace of her robe.
Painted by Cassatt in 1910, the portrait of Augusta was with Galerie Durand-Ruel in Paris until at least 1914, at which point it sold to James Jewett Stillman (1859-1918), a wealthy financier and an avid art collector. Upon Stillman's sudden death in 1918, the work passed by bequest to Stillman's son, Dr. Ernest Goodrich Stillman of New York, who ultimately gave the painting to the Cleveland Museum of Art in 1922. Augusta hung in Cleveland for many years and was exhibited at museums across the United States throughout the mid-20th century. In 1969, the museum deaccessioned the work and, in 1971, the family of the Chestnut Hill gentleman purchased the painting at Hirschl & Adler in New York.