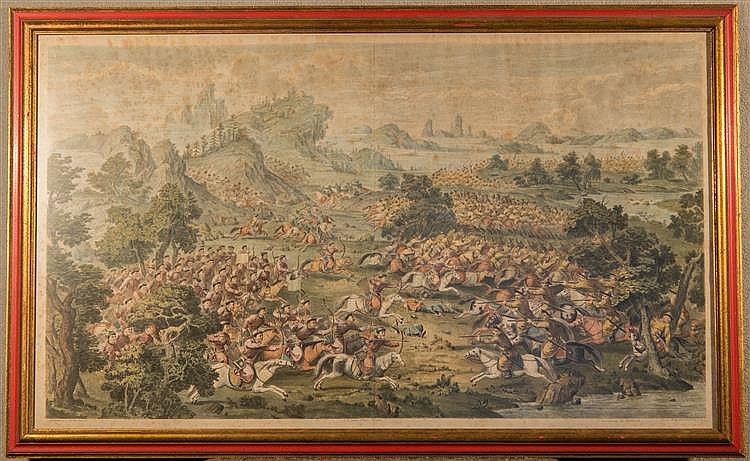 THE CONQUESTS OF THE EMPEROR QIANLONG, HAND COLORED ENGRAVING DEPICTING "THE VICTORY OF KHORGOS", 1774

THE CONQUESTS OF THE EMPEROR QIANLONG, HAND COLORED ENGRAVING DEPICTING "THE VICTORY OF KHORGOS", 1774
drawn by Jean Denis Attiret, 1766, engraved in France by J. P. Le Bas, 1774, under the supervision of Charles-Nicholas Cochin; bearing gallery label on verso for Gordon Dunthorne, Etchings and Engravings, Washington, D.C.; image: 20 x 35, (24 x 39 in.)

Other Notes: This engraving is number four of a set of sixteen engravings commissioned by the Emperor Qianlong ( to record and commemorate his campaigns (1755-1759) in Central Asia. The original paintings were commissioned by the emperor for the palace in Beijing in 1765. The four Jesuit missionary artists involved in producing the drawings for the engravings included Jean-Denis Attiret (1702-1768) who drew The Victory of Khorgos and others of the set. The engravings were executed in Paris under the direction of Charles-Nicholas Cochin of the Royal Academy at the Court of Louis XVI. The engravers of the set included Jacques-Phillippe Le Bas (1707-1783).

This series is a remarkable example of fusion between European and Asian art. Complete sets are very rare.

You agree to pay a buyer's premium of up to 25.0% and any applicable taxes and shipping.